Teaching the Wine Peeps About Coffee

Mondays are somewhat long work days for me. Most days rope me into hours upon hours of slow work, intermittently interrupted by customers saying hello or goodbye. I usually come to work on Monday a few minutes after 7, and it's one of those days where I try to decide if I want to take the faster route or the more scenic, less-stressful one. In the afternoon I fire up the roaster and the repetitive purr of her drum and airflow either drive people into further concentration... or it drives them away. I roast coffee for a few hours and then I have to wait until the drum cools down before I turn it off and go home. So Monday nights always hold a couple hours of relaxation, chit-chat amongst friends, and maybe some Bulliet and an Alec Bradley Maxx.
This morning our friend Scott Large, of Thirst Wine Merchants, came in for an iced latte. He was with a guy named Matt, who is the GM at the Owen Roe winery. Owen Roe makes great wine... and you pay for it. Matt asked for a recommendation and I suggested an americano. He opted for a large. I would've had him drink a small. I was chatting with Scott and noticed Matt was trying to tell me that the cream pitcher was empty. He had it tipped over his cup, shaking it, trying to get a drop to fall from the spout. I looked over and said, "WHAT ARE YOU DOING?" He said he always drinks his coffee with cream. I said No, don't do that. He said ok and then instinctively picked up a packet of sugar and ripped the top off. I said, "Quit that. Did you even taste it yet?" He said no. I asked him if he salts his steak before he tastes it and he told me he doesn't even salt his steak. I told him to drink it as it was prepared and he would find that the natural sugars are in there from the coffee. And it is sweet. And when it cools, it will turn into the most milk-chocolatey coffee you've ever had. He told me he was just used to drinking Stumptown coffee (because he's from Portland) and it was instinctual to put cream and sugar in it.
But the story Scott was telling me was about a dinner he had yesterday at Philbrook Museum. There's a woman named Deborah Madison who is in town from San Francisco. Scott says she was a leader in the "eat local foods" movement. And I see that she wrote some cookbooks and owns a restaurant. She had never been to Tulsa and was asking what she needed to experience while she is here. Scott said that the DoubleShot is something not to be missed. He said he's been all over the world and hasn't found better coffee anywhere. Which is a really nice thing to say. He said James chimed in (who I assume is Shrader, who owns the Palace Cafe) and they continued to talk about me and the DoubleShot purportedly for an hour. I thought that was funny. I guess the Philbrook is having an event tonight with Deborah, but we haven't seen her yet.
On Saturday a bird walked in the front door. I didn't notice it until it wanted out. Michael and I spent 15 minutes trying to catch it or shoo it out. We were worried the poor bird was going to kill its little self. At one point it flew at top speed across the room, straight into the window, slightly woozy. Eventually it found the back door.
I went to Steve's Sundries this morning to get the latest issue of Wine Spectator magazine. It wasn't on the shelf yet. But as soon as it is, you should go pick up a copy. This is going to be a collector's edition. Even if you're not into wine. You know, Wine Spectator is the most widely read magazine in the world, with over 2.58 million readers. And this month, the DoubleShot is featured in a small section about coffee: http://www.winespectator.com/magazine/show/id/42616

See below for DoubleShot Holiday Hours of Coffee... 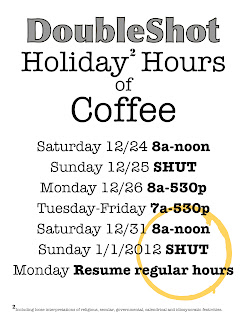 Time is important in brewing coffee. Not just time, but timing. Listen to the deep, haunting, harmonic rhythm of the song "Abdication And Coronation" by Jan Bang. Listen to it real loud in your car with the windows up, so you can feel it in your diaphragm. Think how this song would be different if you let the Beastie Boys perform it in their stop-and-go style of Brooklyn hip-hop.
It's the difference in the taste of a presspot of Sumatra Aceh Gold versus a pourover of Colombia Maduro.

Maybe if I stand next to something massive, like the Burj Khalifa, I'd be able to brew coffee sideways. And maybe time moves faster inside the building than out and I could brew a presspot in 3 relative minutes. Maybe not.

I think about time when I read about Colombus crossing the Atlantic and finding a bunch of (soon-to-be-exterminated) Indians in the Dominican Republic and Honduras and Venezuela. And when I read about Lewis and Clark crossing the continent and finding a bunch of (soon-to-be relocated) Indians on (soon-to-be-confiscated) land in mountains and prairies and on rivers and deserts. It only took us 200 years and two coffee revolutions to pave the entire west coast. And shortly after Colombus populated the Caribbean with Europeans, the French would replace the dead Indians with African slaves and build coffee plantations on their backs until a bloody rebellion saw the "masters" in the unstable ground beneath the feet of the oppressed. It wasn't that long ago. How many Haitian Bleu coffee beans have been roasted in Portland coffee shops over the past 200 years? Not enough, I tell you.

And when will the Maduro be back in stock at the DoubleShot Roastery? It's been far too long. I can't agree more, but patience (the virtue my mother warned me never to pray for) mixed with anticipation is a healthy use of this time. Oh god, I wish I were more patient! No no! Patience comes with trials. Damned the answered prayers. And to hell with that Garth Brooks song too. As far as I know, Maduro landed in the U.S. two weeks ago. There is always time spent waiting for Customs to clear the container before we can get the coffee. It will be here soon, I'm confident. And it will be better than you remember.

The last few seconds of a roast, especially of a new coffee that I don't know very well, is crucial. It's sort of like when I was a kid and I loved cinnamon toast. And my mom taught me how to make it: spread butter on the bread, get the brown plastic bear with the perforated top and generously shake the cinnamon/sugar mixture in a snake-like pattern across the bread, turn the oven on broil, put the bread on a pan and get ready. Because you know there's a perfect done-ness to cinnamon toast, and those final seconds are heart-wrenching. You can't keep opening the oven door, but if you let it go too long it's not very good, and if you don't get it done enough you might as well have not wasted your time putting it in the oven at all. It all happens so fast and a few seconds can mean cutting the crust off the bread, or worse (smoke pouring out of the oven, setting off the smoke alarm, climbing up onto a dining room chair, fanning it with a dish towel, heart pounding). You have to get it right. Just right. Right second. Right done-ness. I'm that little kid with my cinnamon toast Roaster, fretting over seconds and coffee beans. Because it's really hard to trim the crust off a coffee bean.

The DoubleShot is now 8 years old. Its' birthday passed Monday in relative workaday routine. It's actually somewhat remarkable that the DoubleShot is afloat. People say different things about it, and I have my thoughts. And I remember a lot; less, though, than I don't remember. It's a place where I call the shots and I respond to every need. A place where several years have passed fairly quickly, but not as many years as it has felt like. And maybe it's time to revisit the reasons I opened the DoubleShot to begin with, 8 years ago on March 5, 2004 (when my baby had just turned 38). I had a dream.

The day I roasted the first batch of coffee in my kitchen with a fluid bed roaster I bought from Coffee Project online, I had an epiphany that would change my life dramatically. All at once, the coffee exploded onto my palate, which I remember in vivid colors and emotions, and I remember looking out the arched window, across the street to a small field of dormant yellow grass, frosted with white winter dew, shaded by the IDL, smiling, puzzled. Where had this flavor been hiding? Where did this vibrancy and complexity come from? It was as if I had been drinking coffee in that cold, scratchy, yellow, overcast field my whole life, and I'd just tasted Summer mountain wildflowers in shades of blue and purple Columbines, red and orange Indian Paintbrush, white and pink Elephant's Heads. It was like the first time, at 23, I drove through the Colorado Rockies, after spending my entire life in the cornfields of Illinois and the red dirt Crosstimbers of Oklahoma. It's the monotony of sameness over time that lulls you into being okay with mediocrity. And at some point I decided that I should share this discovery that I found hiding inside coffee beans with the people around me. Because I wanted everyone else to have the experience I had there in my apartment in 1998.

This week, on our anniversary week, give the coffee a little time. Pause for a second. Take the lid off and sit down. Inhale the aromas, aerate the coffee in your mouth and swish it around on your tongue and exhale through your nose so you can catch the smell before you swallow. Enjoy the coffee, and explore the difference in the cup that is inherited from our years of experience and our attention to minute increments of weight and forces and seconds.
It's all for you.

*how long it took to gain the experience necessary to roast and pull that delicious shot of single-origin espresso you drank on the sidecart Tuesday morning.